Google shows Profiles in SERP - What it may mean? 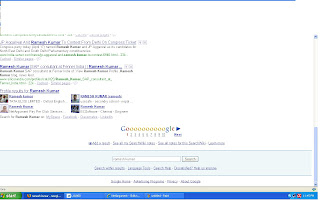 Last week Google added a new feature in SERP. When you search for the name of a person, you are likely to see some Google Profiles, at the end of the first page. Check the snapshot I have taken for Google search - Ramesh Kumar, which shows my profile in the second row. Too see such kind of results:
All over the world SEOs are alarmed over this development. Is Google going towards Authority based ranking in SERPs. Earlier, Matt Cutts had given signal that Page Rank based ranking system might get substituted with a new system. This comment was followed by non inclusion of Page Rank indicator in google chrome web browser. Page Rank a pathbreaking advancement in search technology has been the most targeted thing among SEOs. However, since its launch, its secrets have been demistyfied by intelligent web reasearchers, and even a third rate SEO now knows it is based on inbound links. This algorithm gave rise to cat and mouse game between Google and SEOs. One side SEOs descovering the new algorithmic tweak and trying to manipulate, and on the other side, Google trying to catch the manipulators by adding some patches to this algorithm. People have gone to the extent of saying that this algorithm has given rise to spammy link building and launch of crap websites throughout the internet, to fecilitate link building. Page Rank algorithm has many loopholes, and over the time period we cannot assume it to deliver same high quality results as it used to when launched.

From the recent changes in the SERP, it looks like Google may give authoritative ranking a preference over, Page rank or at least authority might carry weightage. Let us wait till smoke gets cleared of this situation. However, if it comes out to be true, then SEOs may be running after some internet authorities to gain position in SERPs. Not an easy task though!